Why A GSSL and SSL Compressor Aren't Exactly the Same

Where we discuss new analog design ideas for Pro Audio and modern spins on vintage ones.
Post Reply
3 posts • Page 1 of 1

Why A GSSL and SSL Compressor Aren't Exactly the Same

I've been looking for this SSL blue line drawing and just found it. It shows how the 82E26 cards and the 82E27 in the original SSL are connected together. Note that pins 16, 33 and 42 of the 82E26 are bussed from one board to the other and common at the 82E27 sidechain card. Now pin 42 is particularly important: The output from each 82E26 card is the cathode* of a diode. Because of this, the channel with the highest input will dominate the response of the 82E27. Put another way the entire buss comp is controlled by "the greater of two peaks."

*On the actual 82E26 the diode polarity is reversed. The anodes are common. Please also see:

The GSSL is a different animal. Note that in the GSSL the audio is combined into a single sidechain path:

For the GSSL to function like an SSL buss compressor, that is "greater of two peaks," it requires two sidechain paths (the 82E26 card part) whose outputs are combined at point C here: 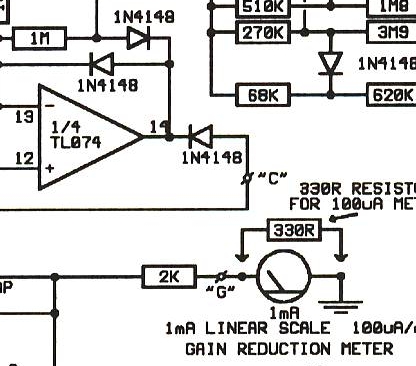 This is what ssltech, one of our new members here have written about over at Prodigy-Pro.

There is a significant difference in these two approaches. By combining outputs after peak detection, the effect of signal polarity/phase correlation is eliminated.

By summing audio prior to detection, as in the GSSL, compression is biased to L+R. To put another way, the mono component is compressed, the L-R is not.

It isn't the purpose of this post to say which is "right" or "wrong." The point is to explain what the differences are and why they matter.

But, because this difference is significant, it isn't really fair to say the GSSL is a clone of the SSL. It is not.

EDIT: Jakob, by the way openly says this on his website and mentions the "tilt" effect in the 4K as being the reason he used a combined detector.


Another change is that the sidechain is common to both VCA's, making better tracking abilities - your mix wont' "tilt" so easy when you're compressing heavily. We did things like that to the SSL in the old days. This might seem like a big change, but actually the sonics are preserved very close to the original, and tracking errors are cancelled.

I'm not sure what he means about mis-tracking and tilt. If tilt means one side becomes heavier creating a center-image L-R shift I don't see how that could occur with the VCAs driven by the same control voltage to both the left and right channels. The only situation I can see creating that would be control-voltage tracking within the VCA. A common detector wouldn't solve that problem as the mis-tracking would almost have to be post-detection. I'm unclear about that. I commissioned a lot of SSLs and never heard that happen.

Now if the slope switches on the 82E26 cards don't track well one channel could dominate compression but the center image wouldn't shift. The compression just wouldn't be right.

Using dual detectors in a greater of two peak sidechain is identical to the original and looks at the overall peak level of the stereo pair.

Algebraic summation at the input, e.g. summing left and right, allows the compressor to only "hear" in mono. In the extreme example, two identical level signals input completely out of polarity are not detected at all.
https://ka-electronics.com

Re: Why A GSSL and SSL Compressor Aren't Exactly the Same

Do you know of any other compressors which use this "mono" technique... I know that you can get a similar effect in protools with some "stereo" plugins. My students get a bit of a shock when I show them putting an out of phase sine wave through a "stereo" 1176 plug that it doesn't compress. Easy work around is to use dual-mono plugs, but then of course you potentially have the problem of image shift.

I must admit, I was a little surprised when I built my first gyraf version and read the schematic. Probably that university education about phase/channel difference issues with stereo compressors. I guess it is approaching a sort of M/S compressor. Maybe we need to put your M/S circuit before the Stereo Pico!

The gyraf version is surprisingly still very effective. However, can't wait to try the stereo pico!

Re: Why A GSSL and SSL Compressor Aren't Exactly the Same

Thanks ghengis. I don't know of any that sum L+R as audio ahead of the detector. Not to say that there aren't some that do. Roger, in the original Pico Compressor, did provide this as a build option but I don't know of anyone that's used it. Most that we've heard of used true power sum.

I agree that the GSSL is an "M-S" compressor; It's processing only the "M" channel. I think one of the reasons that people like the GSSL is that it tends to "widen" images squashing more in mono, or mid, than "side."

I do think an M-S matrix ahead of a stereo pico compressor would be interesting to try. Neve in the 8016 has that M-S insert...

I think that the stereo pico compressor excels at density improvement increasing the perceived level. If I look at the visual images of the demo sound files that Roger sent me they still have a reasonably high peak to average ratio. Another term for this is crest factor. But the samples sound tight, with punch, very full. But they still have impact.

The SSL and Keith's greater of two are really good at peak level control. They focus more on level rather than energy or power. For dynamic range control, to fit a channel's limits or the confines of a medium, this is probably a better choice. In broadcast we often see both energy management and absolute peak level control.

The GSSL, and your tests with the 1176 plug-in are revealing, are half of the M-S image equation. It provides a tool to widen mixes and can provide a very nice effect. But what if a mix is too wide without good mono fold-down? You're right - that's an application for a full M-S processor. As a peak level controller, or a density enhancer it may be lacking.

Each are three very different tools.

I probably should check with Roger about posting some of his sound files. I listened to them and were impressed with their punchiness, but when I opened them in an editor I was surprised to see how "un-processed" they looked. It wasn't like looking at the modulation envelope of an FM transmitter or incredibly clipped squashed-to-the-wall modern CD.
https://ka-electronics.com